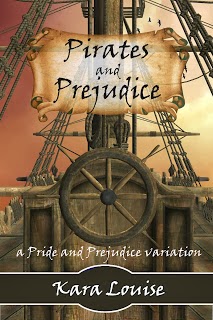 This is another book I tore through while in San Francisco a few weeks ago. I adore Kara Louise's books (especially the often overlooked Master Under Good Regulation, my review of which you can read here), and this one fully met my rather inflated expectations.  This is the second time Ms. Louise has taken Darcy and Elizabeth's romance onto the high seas (she previously did so in Darcy's Voyage, my review of which you can read here), but I think Pirates & Prejudice was even better than its predecessor. I mean - Pirate Darcy?!?! It can't really get any more awesome than that.

But how did the upstanding and conscientious Mr. Darcy take on a life of piracy? I was a bit hesitant on this point when first considering the concept, but Ms. Louise pulls it off perfectly. Devastated by Elizabeth's rejection at Hunsford, Mr. Darcy dismisses his valet and drowns his sorrows in drink. Unshaven, dirty, and disoriented, he is mistaken by a few law enforcers for the escaped pirate Lockerly, scourge of the high seas. It takes a bit for poor Darcy's protestations to be heeded, but eventually one Foster, a police inspector, proves receptive. However, instead of granting Mr. Darcy his freedom and abjectly apologizing for the manner in which he had been treated, Mr. Foster has plans to lure the pirate out of hiding, using the bearded Mr. Darcy, who bears a strong resemblance to Lockerly, as bait. They have his ship, and Darcy is asked to start recruiting a crew, posing as Lockerly all the while. So you see, duty to country and justice impels Mr. Darcy to bare his chest and speak in cant, along with a justified fear of Foster exposing his plight should he fail to comply. It is all perfectly characteristic.

Back at Longbourn, Mr. Bennet receives a letter from an ailing sister in the Isles of Scilly. He and his favorite daughter embark on a visit, thus setting the stage for swashbuckling romance. Obviously, neither Darcy nor Elizabeth's adventures can proceed smoothy, for it they did, we could never have this scene:


The crewman with the short rope wrapped it around them snugly. As he cinched it tight and knotted it, the two stood as close as any two people could be. Elizabeth felt her heart pound as she considered she had never been so close to a man before. She felt weak and precariously close to collapsing in a heap at his feet, despite being tied together at their waists. To prevent herself from fallen, she quickly reached up and wrapped her arms about his neck, holding on tightly.

The captain responded with a deep moan and quickly brought his one arm around her. She felt him draw her in even closer than she had believed possible. A sensation of euphoria swept over her, and she found herself readily resting her head against his chest. She could hear his thundering heartbeat and wondered if it was beating more vigorously than hers.

"Now hold on tight, Miss Bennet." His lips brushed the hair by her ear as e huskily whispered these words. She felt her legs begin to tremble and suspected he felt it as well, as he gripped her even more firmly.

"Are ye ready?" he whispered softly; his breath seemed to warm her to her innermost being.

"Yes," she said, as she lifted her head to look up at him. She saw his dark eyes looking down at her, a single brow raised.

"Ye are not afraid?"

"On the contrary, I believe I shall enjoy this immeasurably!"

He inhaled deeply and whispered, "As will I."

As he was about to step off, she asked with a nervous laugh, "You have done this before, have you not?"

"Never!" he said, and the next thing she knew, she was lifted off the ground, and they were swinging through the air. She held on tightly, wanting desperately to keep her head snuggled up against his chest, while at the same time wishing to look up, down, and out to see what was happening.

She finally turned her head and opened her eyes, just as they came over the Devil's Seamaiden's bow. She felt the rope lower, and the next thing she knew, they had come to a stop. The captain landed squarely on his feet, but he continued to hold her up in his arms. He finally relaxed his grip around her waist slightly, allowing her feet to touch the deck.

This book was such fun! A world away from Jane Austen, yet somehow still safe and snug within her parameters. I highly recommend this thoroughly entertaining story.

Please check out my other reviews of Kara Louise's novels, all of which are excellent.


This is my tenth review for The Pride and Prejudice Bicentennial Celebration 2013, hosted by Austenprose. Please see my others below:

Bluebells in the Mourning by KaraLynne Mackrory